In the space of a few years E.ON has transformed itself from a complex, integrated electricity generation and distribution company to simpler distributor of electricity. The transformation is the basis for our investment thesis – that investors will give credit to the hitherto unrecognised value of these regulated grids. It has been interesting to see this story unfold from an ESG perspective, particularly the delayed reaction in ESG research and rating as the transformation and decarbonisation of the group unfolded.

We first became interested in E.ON in May 2015. The stock had underperformed the market every year since 2007. Profits had been progressively eroded by poor fundamentals in the German energy production market – meagre demand from weak economies, subsidies for renewables, the early shutdown of nuclear and associated provisioning post Fukishima, and finally the collapse in coal and oil prices.

The confluence of these pressures spurred E.ON’s management into more radical action – a split up of the company was announced. The commodity assets of the business were to be spun out into a ‘Bad Co’ in the second half of 2016, along with the nuclear liabilities but without any financial debt. This would leave behind a ‘Good Co.’ with renewables, distribution and customer solutions as shown in figure 1. 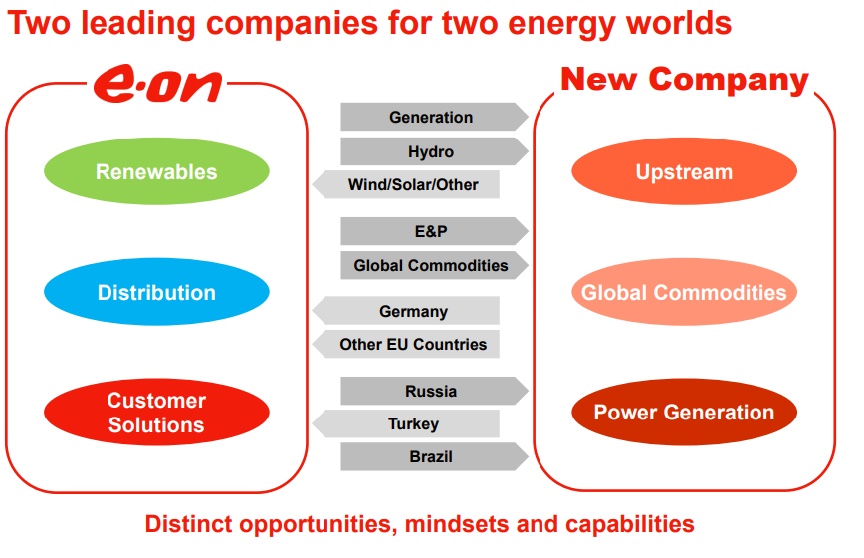 On the basis of our own valuation analysis, we believed that the market was giving no credit for E.ON’s regulated grids, whose fundamentals were sound. There was also nothing in the price for a recovery in power market fundamentals. Finally, we believed that there was free upside optionality from a positive outcome around litigation on nuclear liabilities. The split between Bad Co/Good Co would be the catalyst for investors to recognise this.

The split would also result in a significantly decarbonised Good Co. with a focus on growing its renewables portfolio (see figure 2 below). At the time of the announced split, we noted that E.ON’s ESG rating from MSCI remained unchanged. 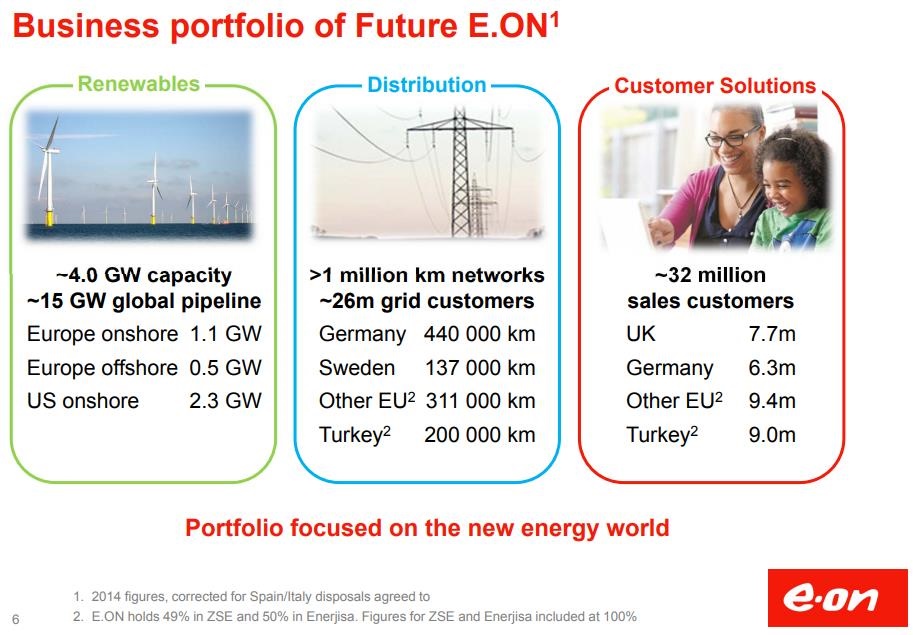 On 8 September 2015 the company announced some modifications to the terms of its spin-off plans. German nuclear assets and liabilities were instead to be retained by E.ON rather than transferred to the Bad Co. The change was a reaction to the Government’s draft law that could have made E.ON liable for nuclear liabilities post spin-off for an indefinite period. While this changed the capital structure of both entities, the investment thesis still held. We made an initial investment the following day.

In January 2016 the split up of the business went ahead. We divested our holding in Uniper (the Bad Co.) shortly thereafter, leaving us invested in the new E.ON centred on renewables, energy networks and customer solutions. The ESG rerating followed suit (using MSCI as an example), but not until July. MSCI upgraded the company to AA, putting it in the top quartile for opportunities in renewable energy.

While E.ON retained a 46.6% stake in the Uniper, it has since agreed to sell this, providing further support to the transformation to a simpler, higher quality business and away from carbon-intensive assets. This 46.6% stake was only retained in order to minimise the tax leakage from the transaction.

In March 2018, the company made a further major strategic announcement – an asset swap with RWE, another major German utility. When the deal completes this year, E.ON will have exited almost all generation assets, leaving a simplified business model focussed on regulated grids (see figure 3 below). We believe this deal will lay bare the value of the regulated assets that remained unrecognised in our original investment thesis, as well as realise meaningful synergies.

Figure 3 – The asset swap with RWE

As with the first phase of E.ON’s restructuring, ratings providers have been measured in their rating review of E.ON post the announced asset swap – MSCI, for example, have yet to review the implications of this deal on the ESG rating of the business. We suspect it will continue to support the positive ESG trend of this investment case. We believe this highlights the danger of assessing ESG fundamentals of a company based solely on the rating ascribed to it. These ratings are backward looking and there is usually a significant lag between changes in a company’s fundamentals, and a corresponding change in the ESG rating. In fact, MSCI analysts themselves have carried out research showing that a strategy with an improving ESG rating trend can significantly outperform both the benchmark and a comparable strategy that tilted the portfolio weights toward companies with already high ESG ratings. 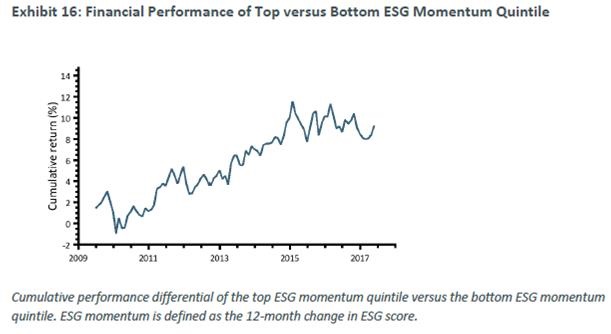 It is worth noting that since the Good Co/Bad Co spinout in 2016, the latter (Uniper) has outperformed the MSCI World by over 100%. This is despite being given a B rating by MSCI, only one notch above the lowest ESG rating in their universe.

At Oldfield Partners we are not ESG evangelists, but as fundamental long-term investors we consider it a sensible part of company analysis to assess corporate governance, as well as the management of social and environmental issues. This forms a part of our risk assessment of business fundamentals. We believe that ignoring ESG factors may lead to an incomplete understanding of the risks to an investment case, and may consequently result in the wrong investment decisions.

Our starting point is not to exclude any particular sectors or countries. However, we do avoid companies about which we have serious governance concerns, and companies in which we have concerns about business being conducted in an unethical manner, unless it is clear that such concerns have been or are being dealt with by management and any shortcomings have been addressed.

Once we become shareholders, it is our responsibility to continue to monitor any relevant ESG issues, and to engage with management where appropriate. We believe responsible ownership is a necessary part of our fiduciary duty.

In this context, ESG factors are integrated into our investment process, at the idea generation stage and throughout the investment horizon. As long-term investors, this may span over several years. This is reflected in key investment notes, where there is a dedicated section for analysing relevant ESG issues.

ESG incidents are identified by either portfolio managers and analysts or by third party providers such as MSCI and Sustainalytics. Issues are assessed by the wider investment team with additional oversight from the OP Stewardship Committee. Managing an ESG incident is done on a case-by-case basis and will depend on the materiality of the incident. In fact, ESG-related issues often provide us with investment opportunities where we can see an improvement in such issues playing a role in the recovery in the results and perceptions of a company and its share price.