We are stock pickers. Our primary concern is with the condition of a company’s earnings, cash flow, balance sheet, management and corporate governance. However, no serious assessment of a company can be made without regard to the industrial background within which it operates, both domestically and internationally; or longer-term trends in an economy, particularly demographic and regulatory conditions.

Much has been written about the failure of Abenomics: inflation remains low and given the scale of the Bank of Japan’s quantitative easing, asset reflation has been disappointing. Foreign investors have fled the market having sold this year almost all of the equities that they had bought after Prime Minister Abe first announced his ‘Three Arrows’ policy. Moreover, Japan seems to have become a bit part player in global politics: an after-thought in President Trump’s trade wars largely ignored on North Korea and with an apparent loss of influence in the Asian region, some even suggesting that Mr. Abe had to squeeze his way into talks at the recent Eastern Economic Forum in Vladivostok at which China and Russia appeared to get closer.

Is that view of Japan and its Prime Minister fair? We think not. Mr. Abe has just been re- elected as leader of the ruling Liberal Democratic Party and thus will remain as Prime Minister. If he stays until the end of 2019 he will have achieved the longest total period in that office since the Meiji Restoration in 1868. So, he must surely be doing something right.

As Jesper Koll, CEO of Wisdom Tree Japan, has pointed out ‘Japan is back as No.1’, not in terms of GDP, but as the world’s largest creditor nation, significantly ahead of Germany and China. After years of rebuilding its financial sector after the bursting of the bubble in 1989 and its corporate sector after the technology meltdown in 1999 and the global financial crisis in 2009, a normalised credit cycle in Japan is starting to take hold. Demographic headwinds do not help the cause, but gradually interest rates are rising, inflation (albeit still low) has taken over from years of deflation and land prices appear to have bottomed, at least in the major cities. Consumer spending is still muted, but wages are rising as labour shortages appear and that should eventually feed through into increased consumption. At the company level capital expenditure is increasing sharply as cash on the balance sheet is available to spend to replace ageing production facilities, to adjust to the growing demand for digitalisation and to invest in robots and new processes to cope with an ageing workforce. Cash is also available to spend on shareholder returns: dividend yields are moving up and the number and total of buy-backs are increasing, particularly as the number of activist investors increase and engagement by institutional investors increases.

Much of the change in trend, particularly as it relates to wages and capital spending, is due to regulatory and taxation changes brought in by ‘Team Abe’ and, again as Jesper Koll points out, Japan’s renaissance as ‘the world champion surplus saver’ and source of financial capital is a key consequence of Abenomics and the domestic economic recovery.

Other notable developments since the end of 2012 have been the introduction of important tax changes, a Stewardship Code and a Corporate Governance Code all targeted at improving balance sheet efficiency (Japanese companies are amongst the worst globally in this regard), shareholder returns and returns on equity. 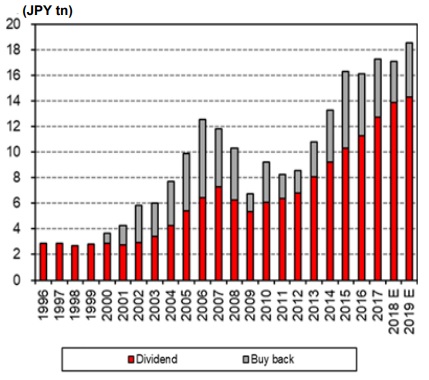 Notes: Based on data for TSE1-listed firms. Share buybacks for FY2017 based on actual buybacks (from financial disclosures).

Share buybacks are increasing (see diagram). During the first half of the current fiscal year to March 2019, the number of share buyback programmes announced was 358 with a value of ¥3.28 trillion, up 14% and 28% year on year respectively

Abe’s changes have also been aimed at increasing the role of women in the workforce as a way of injecting new ideas into companies and alleviating falling numbers of workers; and it seems to have had significant success. According to Fitch Ratings (quoted in a recent Jonathan Allum note), the number of people working in Japan rose to a new high of 66.6million in the second quarter of this year exceeding the previous record in 1997, despite a decline of eleven million in the working-age population since then.

The number of foreign workers in key industries such as healthcare, construction and retail has also been allowed to rise through regulatory change: there are now 1.3 million registered foreign workers in Japan, up from 700,000 in 2012.

Another positive trend is in the corporate sector. Since 2012, the return on equity of the MSCI Japan index has risen from 4.4% to almost 10% and Morgan Stanley MUFG suggest that for listed companies that number could be as high as 12% by 2025 converging with that of the MSCI World index. They also predict that price to book value ratios could expand from 1.35 to 2.15 over the same period, the highest valuation of the market since the late 1990s.

Against a background of investor scepticism, there are some surprising statistics on the Japanese economy. Labour and total factor productivity growth in Japan is amongst the highest in the G7; average hours worked per year are below both the US and the OECD average; and the country’s nominal GDP is at an all-time high, exceeding the previous peak in 1997.

The Japanese market is cheap on a variety of measures in both absolute and relative terms.

As the chart shows, for example, 40% of TOPIX stocks are trading below tangible book value. 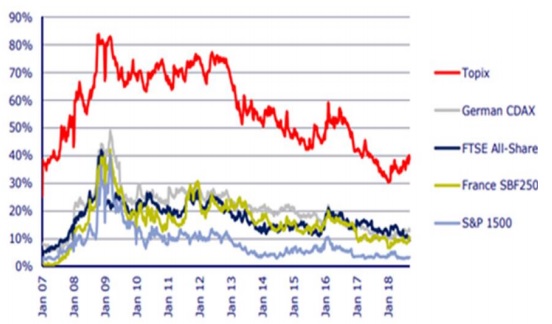 Add in the untapped value in many company balance sheets in the form of real estate, cash and equity holdings and the recent governance and stewardship reforms and it is not surprising that activism and active engagement are on the increase.

We are not activists, but we have always engaged actively with the managements of our company holdings and we are increasingly seeing results in the form of rising shareholder returns, the sale of non-core businesses and more efficient use of cash. However, there is a long way to go. We are under no illusion that we can do it alone, but we can add to the pressure.

As an example, on a recent trip to Japan we met the managements of companies, including Japan Post Holdings (JPH) and its subsidiary companies Japan Post Bank and Japan Post Insurance. We stressed the enormous potential that we see for the group to unlock significant shareholder value. We emphasised that such release of value could best be achieved by the holding company taking bold action by buying back shares and focusing on earnings per share rather than absolute sales and profit targets. We urged JPH to sell down their stakes in the bank and insurance company subsidiaries to below 50% which would give those companies greater commercial freedom. We suggested that the proceeds from such sales should be applied to share buy-backs and not used for wasteful non-core acquisitions. Our message seems to have been well received, but time will tell whether it will translate into action. We will continue to engage actively.

We see much potential for similar release of value in companies with high levels of cash and equities: Nishimatsu Construction, FUJIFILM, Tokyo Broadcasting System and Ushio Inc. to name but a few. The managements are slow to respond even when under pressure from an activist fund as happened with the failed attempt to get TBS to sell its large, non-core stake in Tokyo Electron and return the funds to shareholders. That action did not succeed that time, but it may well lead to action further down the road.

Some companies have already responded to regulatory guidance. J Front Retailing has introduced a committee structure for its board of directors and the majority of them are from outside the company; glass manufacturer AGC has introduced stock options in order to align management more closely with shareholders, as well as buying back shares with the proceeds from the sale of some non-core equity holdings; and Mitsubishi Corporation is focused on strong cash generation is close to achieving its target of deleveraging its balance sheet; the company has been divesting non-core equities, has shrunk its board and raised shareholder returns.

Engagement against a background of regulatory change designed to encourage corporate efficiency is a powerful tool. It can take time, but we are optimistic that recent developments will lead to significant returns.