In addition to low valuations, in the Global Smaller Companies strategy we put emphasis on investing alongside owner managers and, in particular, founders. This takes advantage of our ability to identify the many good investment opportunities with founder managers in the smaller company area. Over half of the holdings in the strategy have a founder still involved in the underlying business and, in nearly three quarters of the holdings, the executives own more than 5% of the underlying company. Academic studies have consistently found statistical evidence for the outperformance of companies with large insider ownership, particularly when still led by their founders. We have outlined seven potential explanations for this anomaly, some based on empirical evidence and others based on our conjecture.

Managers that have many multiples of their annual salary invested in their company have different incentives to those that do not. For an owner manager the incentive is to maximise shareholder value even if it leads to shrinking the overall size of a business. This is not the case for a non-owner manager. The salary of a chief executive officer (CEO) is much more correlated with the size of a business than with future shareholder returns and the performance of a company is inversely correlated with executive pay1. A value destructive acquisition with shares issued could be bad for shareholders but could justify higher earnings for a CEO.

The tenure of founder managers tends to be much longer than the average. A recent study by Rudiger Fahlenbrach at the University of Washington found that the average tenure of a founder CEO was sixteen years compared to just six years for their peers2. The benefits of long tenure are self-evident as experience of navigating through the previous cycle helps prepare for the next one. Further, a manager that expects to be around for the long term is more prepared to take short term pain to invest in projects that will benefit the company in the long run.

Rudiger Fahlenbrach’s study showed that founder managers tend to spend more on R&D and capital expenditure which has tended to result in higher levels of sales growth. Three professors at Purdue’s Krannert School of Management found that founder managed businesses created 31% more patents than their peers3 . These findings were also consistent with Schroders analysis below.

Managers are less willing to take on excessive financial leverage if they have a large share of their wealth invested in a company than if they do not. While the prudent use of debt can aid returns, it is also a major cause for many a company’s downfall.

Founders tend to instil a strong culture that helps add an additional incentive to employees beyond just financial gain. They tend to see their business as their ‘life achievement’ and so try to instil a culture that should endure beyond them.

Founders have already proven their ability to create value by successfully building a company from early stage to being publicly listed. This may mean that, on average, founder managers have superior ability and could help explain their operational outperformance.

We are far from alone in noticing the benefits of investing alongside founders with large insider ownership, so why is it not fully compensated in share prices?

First, to a degree, it is reflected, as valuations for these companies do tend to be higher than their peers; nevertheless, even from these higher valuations, the companies go on to outperform, indicating the valuations have not historically fully taken account of the benefit. 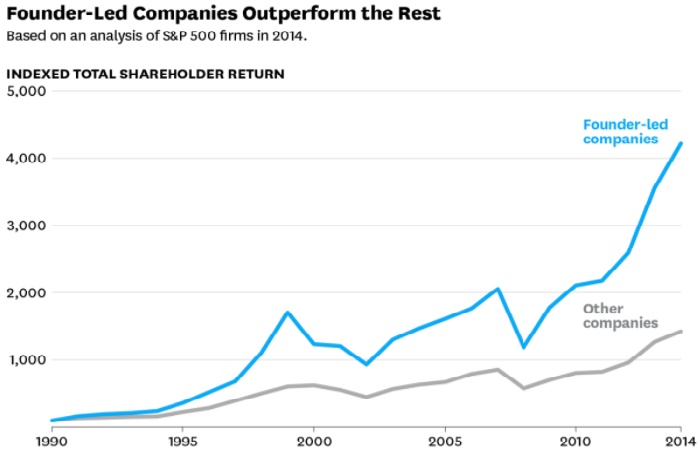 Empirical studies have found that companies with high valuations typically have lower expected returns, so maybe this helps explain why the anomaly has not been arbitraged away, as the two findings contradict each other. There are also other negatives that go with large insider ownership: for example many of these companies have non-standard corporate governance procedures; they can have dual-class shareholder structures that put the outside shareholders at a disadvantage; they are less likely to be acquired and they can be prone to nepotism over meritocracy.

In the Global Smaller Companies strategy we combine low valuations with owner managers which should, over the long run, lead to superior returns.