GAAP accounting came into existence following the depression in the 1930s and the manipulation by management teams in the boom of the previous 10 years. The standards have evolved over time to reflect what is perceived, by accounting standards boards, to be the best practices across industries at that point in time.

Fast forward to the 2020s and there are increasing claims from market commentators that the widening of the difference between GAAP and non-GAAP, or pro-forma earnings is explained by management ‘s deception. Drew Bernstein, from CFA magazine, recently said, "Non-GAAP financials can be described as the numbers management talk about once the auditor leaves the room.” The chart below shows how the difference between GAAP and non-GAAP has widened. 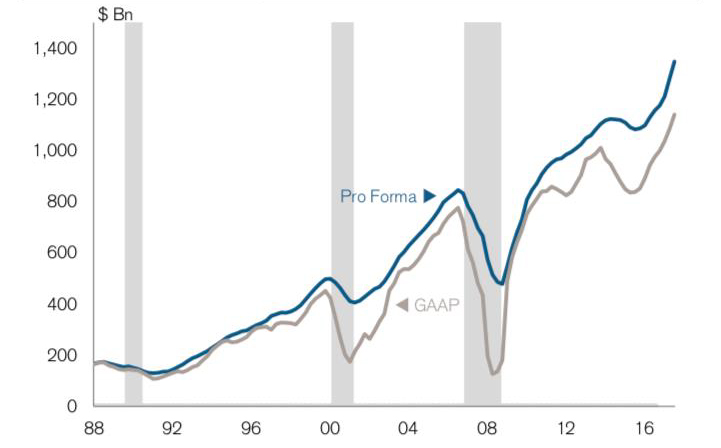 Our starting principle is that GAAP is more reliable than non-GAAP and often non-GAAP numbers have been adjusted too far. However, there are examples where GAAP accounting also lets investors down. John Collison, co-founder of Stripe, recently said, “People think of accounting and GAAP as these fundamentals that are etched into stone tablets. Accounting standards were invented by us humans to give us a view of a business.” In effect, the rules of GAAP are arbitrary in nature and should not be looked upon as truth. Collison goes onto say, “It is up to us [management] to choose what is a better way and what is a worse way and that is why I have absolutely no patience for this crowd whinging about non-GAAP metrics. As they [GAAP metrics] are relatively arbitrarily chosen and constantly tweaked.” We have a great deal of sympathy with Collison’s comments, believing that numbers are a starting point, from which investors must assess the decisions taken by management in how they present their non-GAAP numbers.

There are several examples where the GAAP system of accounting produces outcomes that are not helpful either for investors or management. Two examples that are often mentioned are accounting for intangible assets and the recent changes on how to account for leases.

Adjustments for acquired intangibles are one of the most common adjustments we come across when analysing accounts. Intangibles include items such as brands, customer relationships, business processes and intellectual property. These are often not recognised on a company’s balance sheet when they are developed internally.

Some good examples include the brand value of Coca Cola and the intellectual property of Apple’s iPhone. Neither of these assets can be found on the respective company’s balance sheet because GAAP accounting forces Coca Cola and Apple to expense the associated investments. By contrast companies that depend on tangible assets such as oil companies, will often capitalise these assets. This creates problems for investors when comparing the earnings of businesses across different sectors.

The treatment of intangibles becomes even more complex if they are purchased in an acquisition. It is at this point that the intangible assets are recognised on the acquiring company’s balance sheet. Under GAAP principles, the acquired intangibles must be expensed in the same way that tangible assets are. Many managers and investors agree that this cost is spurious in nature.

It has become common practice for all companies to adjust for the cost of acquired intangibles in their non-GAAP numbers. However, the economic reality is more complex. These two examples may explain why.

E.ON, the German utility, recently acquired the electrical grid assets of RWE. To complete the acquisition, it had to pay a premium to the book value for the assets. These electric grid assets are very long lived in nature and as natural monopolies, face no threat of imminent competition. As a result, we do not believe that the intangibles, that arose due to the premium being paid, should be amortised as they do not represent a true real cost. The replacement cost of the grid assets is captured in the depreciation line.

Sanofi, the French pharmaceutical company, in common with many companies in this sector, has often used acquisitions to substitute R&D in new drugs. Successful drugs have a large amount of economic value while under patent, but when the patent expires the value depreciates materially. As a result, drug companies must refill the hopper with more M&A or R&D. We often find that the pharmaceutical companies that start using M&A become dependent on it. Therefore, in this instance, we consider amortisation of acquired intangibles a real cost.

Another example of where GAAP accounting can be misleading is IFRS 16. This new standard, which was introduced to make life easier for investors, has in fact achieved the opposite. It has created illogical conclusions which make the income statement less useful for investors than it was prior to the new standard.

We believe that ultimately management teams should follow the lead of the likes of Jeff Bezos by “maximising the present value of future cash flows” and not “optimising the appearance of GAAP accounting.” Founder and chairman of IWG, Mark Dixon, is made from the Jeff Bezos mould and was at pains to make it clear that the change in the accounting standard had absolutely no impact on the economics of IWG, its own internal method of assessing business performance and how its lenders assess the business.

In the new world of IFRS 16, managers who are incentivised by variables such as earnings per share or return on capital employed, can engage in activities that manipulate the income statement (and balance sheet) to their advantage, at the expense of company owners. For example, a manager who takes out shorter term leases will likely generate higher GAAP earnings (but a higher cash rental cost) compared with a manger who takes out longer term leases which would lead to lower GAAP earnings (but a lower cash cost). We will take lower cash costs every day.

Accounting is often a complex area and despite well-meaning changes over time from the accounting standards boards they have created all sorts of distortions that can result in negative outcomes for users of accounts. Turning to the sage of Omaha, Warren Buffett, for guidance: “managers and investors alike must understand that accounting numbers are the beginning, not the end, of business valuation.”