Embedded tradition is frowned upon

Many Japanese companies hold shares in other listed companies, which in turn hold their shares creating a convoluted structure and presenting an obstacle to releasing value. Cross shareholdings reflect the tendency in Japan for companies to develop and nurture long-term relationships, which include sharing technology and industry know-how. This approach to establishing such long-term relationships has come in for significant criticism among both international and domestic investors. In June 2015, Shinzo Abe’s government introduced a new Corporate Governance Code which included the goal of reducing cross holdings significantly, with its ‘justify or sell’ approach. At Oldfield Partners we engage with the senior management of all our Japanese holdings, including Nomura Holdings, MHI and MUFG to encourage them to accelerate the reduction of their cross shareholdings, especially those which are not strategic. We were pleased when Nomura Holdings reduced their stake in Nomura Research Institute from 36% to 23% and used the proceeds to conduct a share buyback.

Since the Corporate Governance Code was adopted, each listed firm has been obliged to evaluate and justify each of their equity holdings annually and encouraged to sell the holdings which may no longer be strategic, often after consulting first with each holding. This unwinding process is illustrated by MUFG, which plans to sell ¥800bn of its ¥4.8tn of cross-shareholdings by March 2021. Recently, they consulted with 370 of their equity holdings, but only sold their stake in 24 of them. While these cross shareholdings are prevalent in Japan, this is no more so than within corporate families, known as Zaibatsu. This is arguably the largest source of such cross holdings, with a fifth of all Tokyo Stock Exchange publicly listed Japanese companies (over 620) being listed subsidiaries. These parent-child listings are seen as a problem because Japan does not have laws to protect minority shareholders from being victimised by the controlling parent firm’s efforts to secure higher returns. Cross shareholdings also limit the influence of private and institutional investors as management teams are very likely to support each other’s proposals at AGMs.

Parent child listings can be complicated, as in the case of Toyota. This is illustrated in John Seagrim of CLSA’s tongue twister.

The establishment of stable, long-term relationships between companies such as suppliers and customers are critical to the successful functioning of any business. Alliances enable access to new technologies, enhanced penetration of new markets, along with shared costs of technological developments, identification of synergies and a reduction in R & D expenses.

Returning to Toyota, a company with twenty-three listed group companies and $50bn of equity holdings, management cites the economic logic of its wide range of strategic partnerships. These include extensive cross shareholdings with key suppliers, other OEMs and partners in new and emerging technology. For example, Toyota Tsusho sources critical raw materials for Toyota, as well as running Toyota’s small overseas businesses. Hino Motors produces heavy duty trucks and buses, which are suitable for the early adoption of Toyota’s advanced fuel cell technology, particularly in China, which is keen to adopt renewable energy and could see sharp growth in demand for fuel -cell powered trucks and buses.

Toyota’s relationships with its suppliers are core to the principle of Kaizen, the philosophy of continuous improvement that has been so important in the company’s success over the last 50 years. Aisin Seiki is one of Toyota’s key suppliers. Currently Toyota manufactures one million hybrid transmission units internally, with Aisin supplying a further 500,000 units. Toyota Research Institute has created a JV with Denso and Aisin as partners, to enable Toyota to focus on developing its software development platform, as well as investments in next generation cars and mobility services. More of Toyota’s manufacturing processes, which make up the Toyota Production System, will be outsourced to subsidiaries including Aisin Seiki, Denso and Toyota Industries, which excel at development engineering. 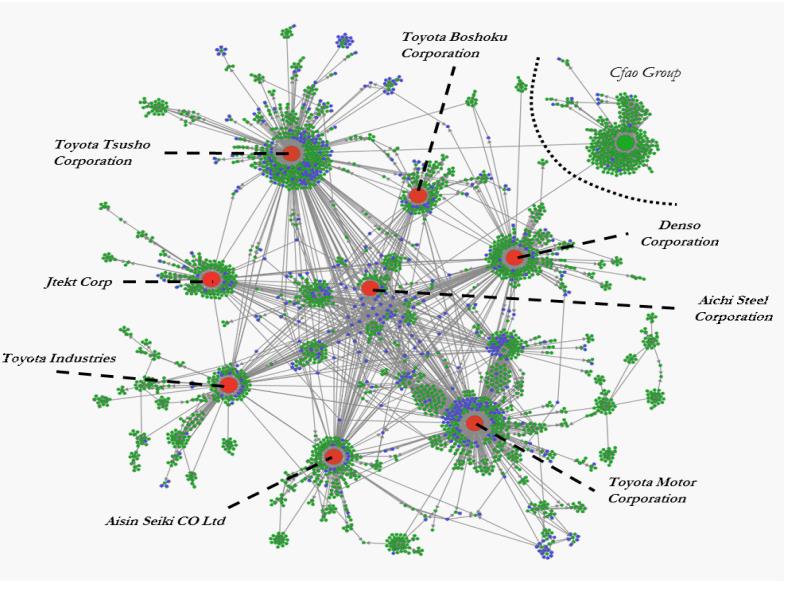 It is surprising in Japan today, despite the five years since Abe introduced his Corporate Governance Code, that cross shareholdings are still seen as necessary by Japanese companies for the establishment of long -term co-operative relationships. Toyota and NTT announced earlier this year that they would extend the collaborative work they have been engaged in to establish technologies for the creation of a smart, mobile society, including connected cars and Toyota’s Woven City project. The latter will be a living laboratory, where Toyota will develop and test new technologies at scale for mobility services, sustainable living, energy, traffic and safety solutions. The site, at Toyota’s old Higashifuji plant, will break ground in 2021. The press release stated that “Toyota and NTT, as partners that share the same values and aim to develop society, will acquire each other’s shares.” Perhaps these cross shareholdings contribute to Toyota’s ethos as, “a Producer of Happiness for All”?

Sometimes selling cross shareholdings is a mistake. In 2010, Toyota acquired a 3% stake in Tesla for $50m at a time when Akio Toyoda hoped the partnership would inject some of Tesla’s start-up, quick decision making and flexible culture into Toyota. However, the relationship did not flourish and in 2014, the two companies ended their contract to build EVs together. Toyota reduced its holding in Tesla shares at that time and sold the remainder as part of their regular, annual review of investments in 2016. The 3% holding in Tesla would now be worth $12bn.

The trend is for each listed firm to evaluate and justify each of their equity holdings annually and to sell the holdings which may no longer be strategic, often after consulting first. Toyota sold only 10 equity holdings last fiscal year.

Today, despite mounting pressure, new cross shareholding arrangements are alive and kicking. This goes against the global trend. Whilst Japanese management teams acknowledge the need to reduce non-strategic shareholdings, many still believe that cross shareholdings are a necessary component of their partnerships, cementing long-term relationships which include sharing technology and industry know-how. The links between different companies in a group like Toyota’s, enhance Toyota’s control over its suppliers, facilitate faster development of new technologies and strengthen their competitive position.

Cross shareholdings may not always be bad, but we continue to push for them to be unwound

At Oldfield Partners, we assess the equity holdings of all our investments and encourage the sale of all their non-strategic cross shareholdings sooner rather than later on the basis that this capital can be employed more productively in the operating business or returned to shareholders. We review whether any listed subsidiaries could be bought in or sold and we engage with management when we disagree with them. We accept that cross shareholdings within a group (like Toyota), may create synergies, particularly for the parent. Hence, we acknowledge that cross shareholdings may not always be bad. However, business partnerships can be successful without the companies owning each other’s shares, so we continue to push for the pace of unwinding to accelerate.