As Churchill said: “The farther back you can look, the farther forward you are likely to see.” The current market environment is beginning to resemble the 1960s. The 1960s were characterised by a wave of increasing enthusiasm, rising equity ownership, and investing in concepts rather than fundamentals. The final wave of these crazy years branded the GoGo years1, saw the emergence of ‘star’ fund managers, the conglomerate bubble and ultimately the Nifty Fifty. The Nifty Fifty went on to deliver above market returns over the following 30 years but that did not stop material declines and capital destruction of between 60-80% in 1973 and 1974.

The 1960s was characterised by a wave of optimism. The Second World War had become a distant memory. People felt a sense of cultural freedom. There was a baby boom and nascent technologies driving economic growth. On Wall Street the memories of the Great Depression were long forgotten, enabling an era of speculation to emerge. At the time the economic and political successes were put down to the “skills of economic management”, increased efficiency and “the wisdom in managing money.”2

One driver of this newfound enthusiasm was the emergence of the mutual fund and ‘star’ fund managers. Perhaps most well-known among this new wave of investing ’stars’ was Gerald Tsai. Tsai popularised the mutual fund and momentum investing. From 1958 he managed the Fidelity Capital Fund but went on to be founder of his own fund: the Manhattan Fund in 1965. By 1969, despite his star status, the fund declined by 90% from its peak.

These star fund managers, among the first professional investors to rely on short term momentum investing, triggered the emergence of a new group of conglomerates who took advantage of investors desires for growth at any cost. Companies including the likes of Litton Industries, ITT and Teledyne. The businesses were run by management teams who believed they had cracked the secrets to management. They thought they could apply their management practices across a range of industries; be it auto parts, movie production or insurance. 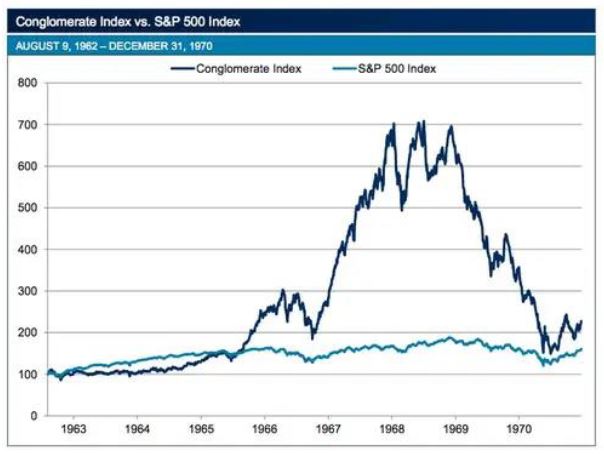 These various mini episodes of exuberance, as there are in any bull market, culminated in the emergence of what was to be coined as the Nifty Fifty. This referred to a group of companies (such as PepsiCo, IBM and Walt Disney) that were expected to deliver exceptional business growth over the coming years and so the valuation of these companies served no relevance in assessing their potential returns. The group included a variety of companies from technology, consumer staples and healthcare.

In 1970 as the graph below shows this group of companies had provided substantial outperformance over the previous five years.

Performance of Quality Growth Stocks versus US Stock market, 1969 – 1973 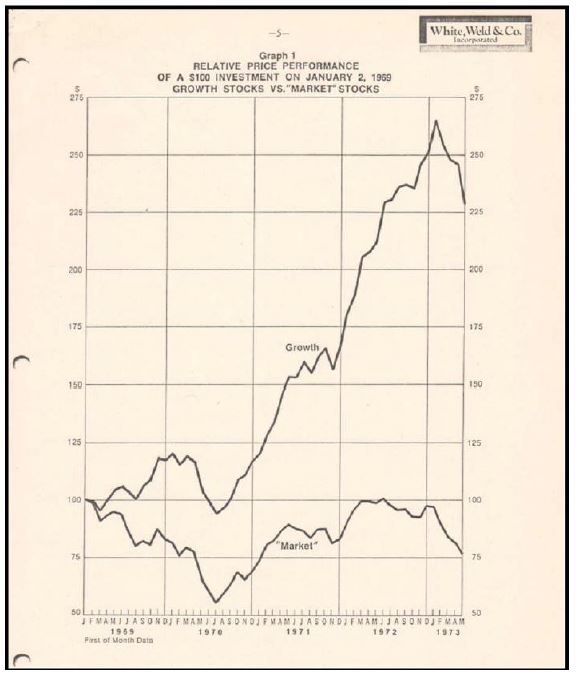 However, from the peak in early 1973 to 1974 these superstar stocks fell between 60-80% undoing all their relative gains from the previous 5 years. 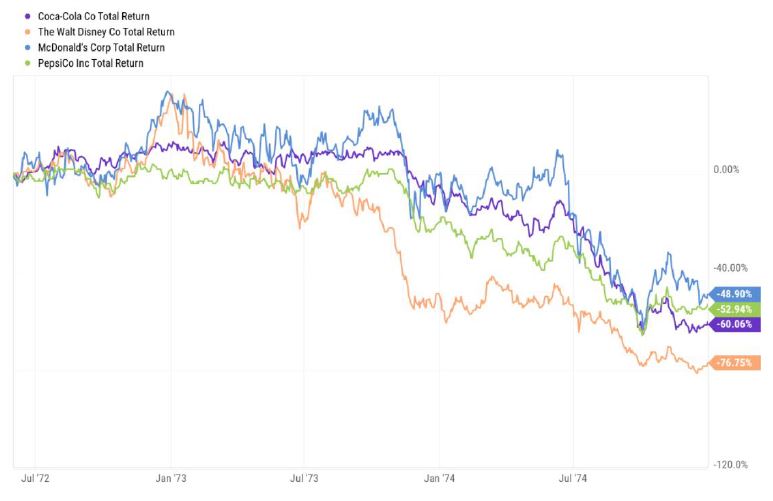 This period of rising and then rapidly falling prices occurred as the optimism of the 1960s morphed into the pessimism of the 1970s.

There is often logic behind bubbles – the Nifty Fifty, 1929 and the dotcom bubble – but it did not mean that excess was not present. Blockchains, virtual reality, artificial intelligence, electric vehicles, or green energy all represent some version of the future. However, as is often the case, it appears that investors have become too excited about the prospects for some of these businesses. It is likely, given the excesses in markets today, that there is much scope for disappointment over the next several years, even if over a couple of decades there are many reasons to be optimistic.

During the last decade headline valuations have become more and more stretched. Investors have paid less attention to valuation, as they peer further into the future. With precious few paying attention to valuations, the odds of good outcomes are not good. The reason OP invests with valuation at the core of our process is that the future is unknowable and low starting valuations combined with low expectations tip the odds in our favour.