As we started to look at companies which have seen their share prices fall substantially over the last few months, we noticed a recurring problem: the use of stock-based compensation (SBC) and management’s willingness to remove this cost from “Adjusted EBITDA” and “Non-GAAP EPS.”

We recently wrote a publication titled Show us the Money. In it we highlighted how Uber’s use of the term “Adjusted EBITDA” was an abuse of the concept of profitability and that true profitability was much lower than stated profitability. One of the largest line items that Uber removed from their adjusted definition of profits was SBC.

Managements argue that SBC is a non-cash expense, settled with shares from the company, so it is not a real cost. This debate has been raging for some time. As Warren Buffett said in his 1992 annual letter “If compensation isn’t an expense, what is it? And, if expenses shouldn’t go into the calculation of earnings, where in the world should they go?”

There are benefits to the use of SBC, such as alignment of interests of employees and shareholders; when tied to vesting periods they can help reduce staff turnover and most importantly, they do not require any use of cash. There are also negatives; firstly, when the share price is declining the benefits of alignment and reduced churn tend to disappear. Secondly, although there is no cash cost, there is a real cost to shareholders through ongoing dilution, as more shares are issued.

You may ask why we are making such a fuss about one line item in a set of accounts? This issue is becoming a much larger problem, as it often does towards the end of the cycle. SBC has risen at an even faster rate than the market itself and the effects appear to be concentrated in one or two sectors.

The below chart shows SBC as a percentage of revenue by sector and geographical split. The two stand out sectors are Technology and Communications, with SBC at 6% and 4% of revenues respectively. Looking across countries the issue is pronounced in the USA where SBC is c.3% for the average company compared with c.0.6% in Asia and Europe.

This is more perverse when you calculate the percentage of net income being paid away in SBC. Looking at the largest 5 companies in the USA by market cap (which make up c.25% of the weighting of the S&P 500), there is a possible disregard for the value of equity. Last year these five companies issued 3.2% of their revenue and 16% of their GAAP profits in SBC. 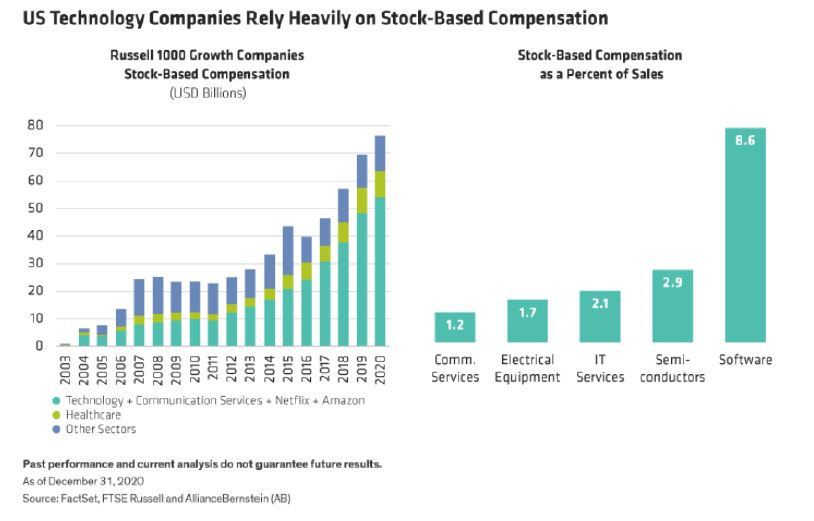 Amazon is a good example of how dilutive SBC can be for shareholders. Over the last ten years they have expensed $43bn on SBC, net of buybacks. Given the current market capitalisation of $1,060bn the number of shares outstanding should have risen by 4%. The number of shares outstanding in 2012 was 450m today there are 508m, a 12% increase. At today’s share price this means a staggering $130bn has been paid to Amazon employees over the last ten years 3x the stated cost. The impact on the valuation is as equally striking based on last years “adjusted earnings” Amazon is trading on a price to earnings multiple of 30x. However, when SBC is included this rises to 47x.

As fundamental investors our assessment of valuation is a huge part of our investment process at OP. Adjusting earnings for SBC overstates the true earnings and cash flow of a business and therefore makes the company look optically cheaper on traditional metrics such as price to earnings ratios than it truly is. When it comes to DCFs, we see many analysts ignoring SBC on the basis that it is not a cash cost. If the company is growing more quickly on a per share basis after dilution than your discount rate, it does not matter, but if growth slows it becomes highly relevant and a large cost. This is the problem that many technology companies are facing today.

Ultimately every bull market breeds its own set of vices. The last ten years have been no different and many companies have abused their shareholder’s equity. Looking forward this leaves us asking questions about their sales per share growth, cost base, employee retention and valuation.