Pressure on Japanese companies to sell their holdings of shares in other Japanese companies (cross shareholdings) has intensified over the past two years. The latest iteration of Japan’s Stewardship Code made it compulsory for shareholders to vote on every item at Japanese companies’ AGM. Disclosure of their voting was made public, with investors encouraged to explain their reasoning. In addition, pressure on management to sell down their cross holdings has risen significantly as ISS and Glass Lewis both recommend that investors vote against the reappointment of senior executives if cross shareholdings account for more than 20% of net assets (ISS) or more than 10% of net assets (Glass Lewis).

We have been asking the management of Mitsubishi Financial Group (MUFG), Japan’s largest bank, to accelerate the pace of unwinding their huge non-strategic equity holdings to improve balance sheet efficiency. These holdings make their capital ratios dependent on the stock market and the proceeds can be allocated to enhancing shareholder returns, including via share buybacks. We engaged with senior management at MUFG to understand why, with over ¥2trn of cross shareholdings, their target was a reduction of only ¥800bn over six years, from March 2015 to March 2021. Their response was that prior the sale of each company’s shares, they underwent a process of negotiation and needed to reach agreement with each holding and that this process took time. Their rationale was that if they bypassed these steps, they would damage the relationship with the holding, which would be detrimental to the future business prospects of MUFG. As the chart below shows, by March 2021, MUFG achieved their target and a new plan was announced; a further reduction of ¥300bn on a book value basis, by March 2024. 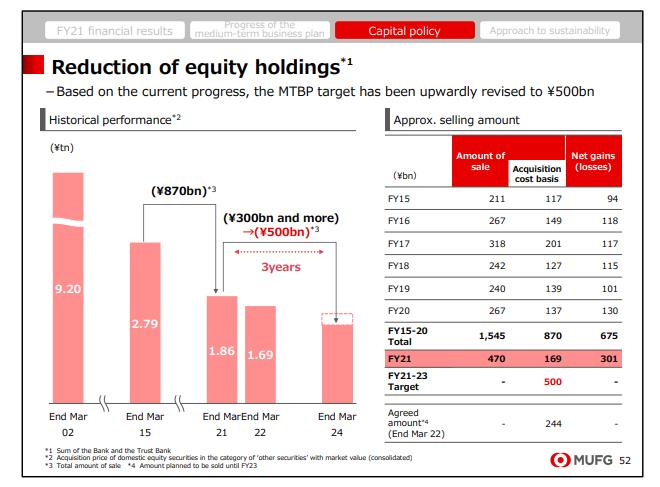 Our response was that the pace remained disappointing, particularly as we advocate for all cross shareholdings to be sold.

MUFG has now taken onboard the concerns of its investors, helped by the guidance from Japan’s Corporate Governance Code, ISS and Glass Lewis. MUFG has a majority independent Board and perhaps they too exerted pressure on the senior executives. By May 2022, MUFG’s cross shareholdings had fallen to ¥1.69trn. As well as raising the dividend and announcing its largest ever share buyback programme at full year results, President Kamezawa announced in May that the initial target to reduce cross holdings by ¥300bn by March 2024 had been raised to ¥500bn.

MUFG has a solid balance sheet relative to global peers and has been returning capital via share buybacks and has a superior credit track record. Later this year, it will sell its US based subsidiary, MUFG Union Bank, to Bancorp. It also owns a 21% stake in Morgan Stanley which it bought in 2009 for $9bn and today is worth over $30bn and valued by the market on 1.5x book. This represents around 40% of MUFG’s own market capitalisation. MUFG trades on around half its own book value in contrast.

The pace of change at MUFG is accelerating, due to engagement by investors and in conjunction with guidance from the Stewardship Code and pressure from Glass Lewis and ISS. We will continue to push for more measures to boost asset efficiency and shareholder value.