Japan’s Corporate Governance Code (“the Code”) was introduced in March 2015.

Significant draft revisions to the Code have been announced, ahead of the implementation of any changes in May. This paper looks at the progress that has been made over the past three years, possibly as the result of the Code’s introduction, and changes that we have observed when talking to the senior management of companies. We also consider what changes are likely to be included in the final document.

The bar will be raised in areas such as board composition, the structure of board committees, diversity and increased transparency in the decision-making process surrounding senior management positions. There will be increased pressure for companies to justify their cross share-holdings.

Since the Code’s introduction, listed companies have been forced to ‘comply or explain’ why they have or have not met its requirements. The Japanese regulator does not enforce the articles in the Code, but its very existence is pressurising companies to change their corporate practices. As we have said in previous notes, the kuki (atmosphere) has changed.

The original version of the Code called for boards to have at least two outside directors, but the likelihood is that the new version will specify that at least one third of the board should be outside directors and they should be judged as independent. The chart below on the left shows that in 27% of TSE1 listed companies, over one third of the board is made up of independent directors. The chart on the right illustrates according to Jefferies the positive correlation between the number of independent directors and the dividend payout ratio. 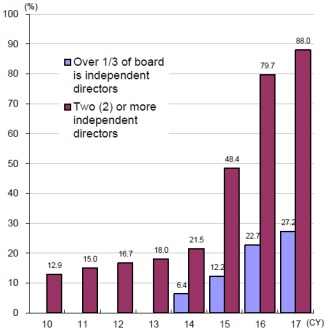 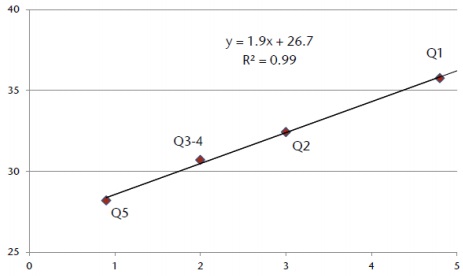 In terms of the skills of board members, the original version did not discuss training or background as being important when companies considered the suitability of new directors. However, the desirability of appropriate experience, such as an accounting or finance qualification, will be emphasised. Figures suggest that only about one in five outside board members of companies in the TOPIX 500 Index have appropriate financial experience.

When talking to the senior management of companies, we stress the need for transparency in all areas of governance including, for example, how board members are chosen and how diverse they are. A recent article in the Nikkei newspaper suggested that revisions to the Code would ask companies to increase the number of female board members. This diversity is often recognised, but as we were recently told by one senior executive, the problem is not lack of willingness, but stems from historic practices that saw few women employed on management training programmes decades ago, so that females with appropriate skills to serve as directors of major companies are few and far between. This will begin to change as the labour shortage caused by an ageing population has led to a higher female participation rate in the labour market. At NTT, one of our holdings, the gender balance of new graduate entrants is now fifty:fifty. Often there is a higher proportion of women on the boards of subsidiary companies. Hopefully, it will not be too long before the situation will improve at the main board level, too.

Hitachi moved to a majority outsider board in 2011, adding many foreigners and women. 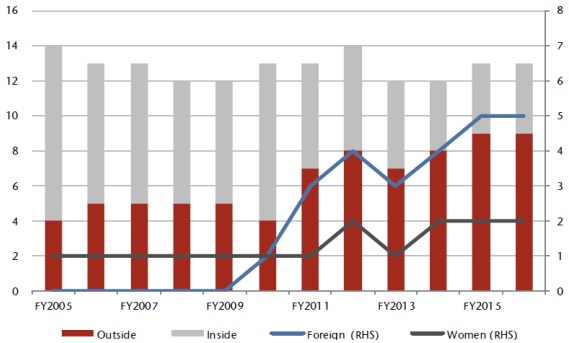 For companies with large overseas businesses, the number of non-Japanese board members is rising. However, sometimes, as is the case again with NTT, government regulation (the telecommunications law in this case) prohibits companies from having foreigners on a board. There is sometimes also a shortage of people with the necessary experience to operate within a Japanese board framework.

The original Code sought to encourage companies to adopt a committee structure for their boards including nomination, audit and remuneration committees. Probably the new version will go further and apply pressure not only to introduce a committee structure but also stress the desirability of those committees having a majority of outside members and, in particular, an outside independent chairman. Department store group J Front Retailing, one of our holdings, was an early adopter of the committee system. This move, together with other changes at the group, led to strong performance last year.

There has been a tradition in Japan of appointing senior advisors, usually former board members or those who had been working at government ministries or regulatory bodies that were overseeing or associated with a company. The method of appointment of those advisors and their remuneration has generally been shrouded in mist. It is probable that either an outright ban or a push for transparency in such appointments, where the person can wield enormous power in the decision-making process of a company, will be specified. Amakudari (‘descent from heaven’), the term given to such appointments, is no longer seen as acceptable.

One particularly interesting development recently has been the appointment of Hiroaki Nakanishi as chairman of the Keidanren1, the Japanese Business Federation.

Mr Nakanishi is the chairman of Hitachi, a major engineering and technology conglomerate, which was an early adopter of governance changes even before the establishment of the Code. We hope that with Nakanishi at the helm, those members of the Keidanren who have been resistant to change will finally accept the need for it. We held Hitachi when Nakanishi was president and the stock price benefited significantly from his restructuring measures.

We are always looking for value and when engaging with company managements we encourage them to improve the efficiency of their balance sheets, as well as raising shareholder returns. The chart below shows that net cash has continued to rise on Japanese balance sheets to levels much higher than in other countries. We look for progress in board structure, transparency in the process of decision making and hope to see real understanding on the part of directors as to why such changes are desirable for the long-term health of the company and thus to the benefit of shareholders. We explain to companies why we think change is necessary but are under no illusion that we alone cannot have a major impact. Nevertheless, we have noticed positive moves at companies in the portfolios including Nintendo, MUFG, Nomura, Mitsubishi Corporation and Ushio, where we have engaged with senior management and where our feedback seems to have been listened to and action taken. 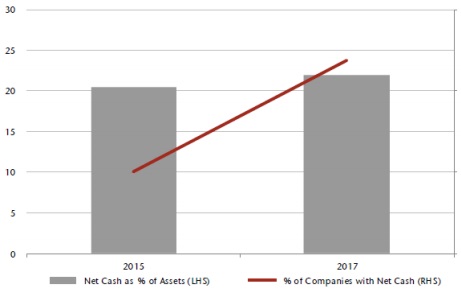 ...resulting in net cash levels that are much higher 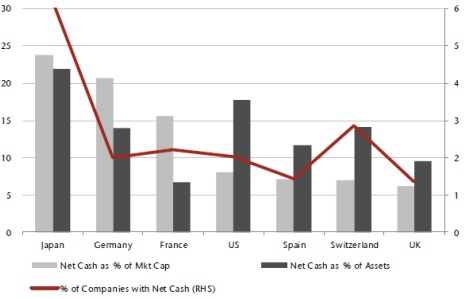 Previous guidance from the Japanese Financial Services Agency and the Tokyo Stock Exchange has used a five per cent target for return on equity (ROE) as a minimum desirable level. It is probable that this level will be increased to at least eight per cent in the coming months: rising ROEs have usually led to higher stock prices. According to SMBC Nikko, when the ROE rises above eight per cent, valuation multiples tend to expand leading to higher stock prices. ‘Some companies get it and some don’t’! Sometimes where a valuation is extremely low and the underlying business is strong or improving, we will buy a stock even where a company does not have the most desirable governance characteristics. We do this because we detect that a recent change of management might lead to improved governance or because we think that the regulatory environment will push the company to evolve. Such change, we think, will lead to the crystallisation of underlying value and the inevitable benefit to the stock price. One example is our holding in Dai Nippon Printing. Many members of the senior management have been in place for a long time and have not been willing to change. However, there are signs that the situation is improving with, for example, the size of the board shrinking from 18 to 12 directors and new independent directors joining the company.

The attitude of senior management is clearly influenced by voting at annual general meetings. In the past, domestic institutional shareholders almost always voted in line with a company’s management no matter what the proposal. However, following the introduction of the Stewardship Code alongside the Corporate Governance Code there was a change in attitude at the Government Pension and Investment Fund (GPIF), the world’s largest pension fund, and managers who were running assets for the GPIF were forced to engage more actively with companies and report the results to the GPIF. Those fund managers are now required to report their voting patterns on a ‘line by line’ basis. One notable problem has been that the GPIF’s passive managers have not been voting. There have sometimes been technical reasons for this, but with the recent establishment of the Investors Collective Engagement Forum, index managers now have a mechanism by which they can engage in proxy voting, but also avoid an accusation of acting in concert.

The above changes lead us to believe that the value that has been locked up and unused in so many Japanese companies will finally begin to emerge. This gives us confidence that the Japanese equity market can continue to rise and within that we are focused on identifying those stocks that are particularly likely to benefit.

1 Established in 1946, the Keidanren is an organisation with a current membership of 1,350 companies, 109 industrial associations and 47 regional economic bodies. The aim of the group is to establish a consensus on the behaviour for its members, as well as engaging with and communicating its ideas to a wide range of interests including politicians, administrators, labour unions and the public more generally.