Last year was a pivotal year for listed Japanese companies. The new corporate governance and stewardship codes came together to encourage directors to improve the oversight of management, engage more with investors and increase shareholder returns. Boards should increase the number of outside, independent directors and they are encouraged to adopt a structure that can effectively challenge company managements to improve transparency, balance sheet efficiency and enhance shareholder returns.

The new codes were designed to discourage the hoarding of cash and to encourage a higher risk tolerance, usually associated with enhanced earnings. Improved earnings should lead to improved returns for shareholders. Companies with higher corporate governance scores usually have better stock price performance. 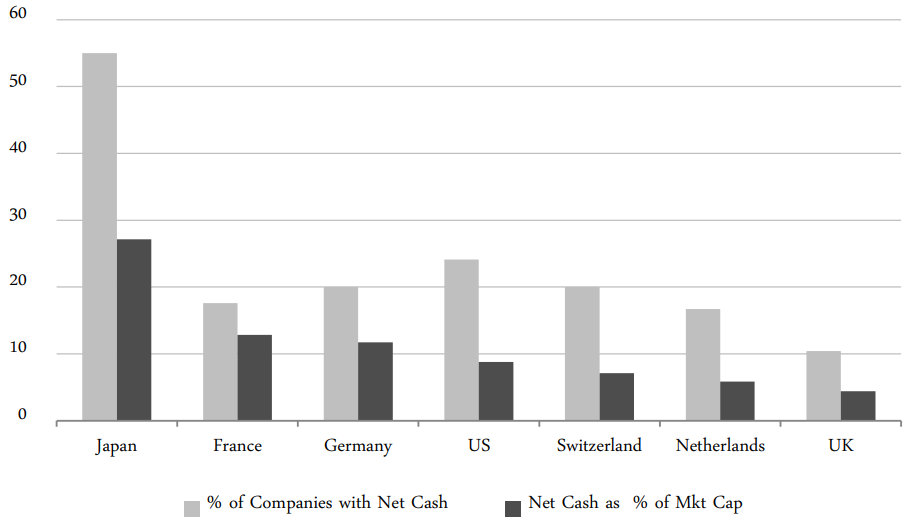 Source: Bloomberg, company data and Jefferies estimates. Data for Japan is for companies within the TOPIX Index.

In this note we consider the progress that has been made since our original commentary on the subject in April 2015.

Reform is being carried out in a deliberate and methodical manner in order to minimize resistance from entrenched company managements and to give it the greatest chance of success. Some investors have been concerned about the apparently slow pace of change, but we agree with commentators who say that although it will take time, the change is real and irreversible.

Total pay-out ratios, including both dividends and share buy-backs, have not increased overall in the past year and these ratios are generally lower than in other countries. However, this year should see an acceleration in the speed of reform, which should provide us with more opportunities for investment in companies that are changing their approach or may be about to change it.

This year’s general shareholder meetings will be the first time that investors will be able to assess the compliance reports that companies are now required to make, stating their compliance with the Corporate Governance Code (the Code) or, in the case of non-compliance, explaining why they have not complied. Ahead of these meetings, we have already seen a number changes within the portfolio holdings. These include Ushio which committed to a new management policy more focused on return on equity; and Toyota which announced an unexpected additional share buy-back at the time of its interim results meeting. This increase takes Toyota’s total pay-out ratio above 50%.

Investors, particularly domestic institutions, are encouraging companies to improve the composition of their boards. Japan needs more independent directors who can raise the level of oversight of management, take action to enhance shareholder returns, improve capital deployment and strengthen risk controls. Companies are beginning to move away from a Board of Statutory Auditors, as many are not truly independent, towards either a committee system or one that employs a separate audit/supervisory committee which must have more than half of its members from outside the company. Amongst the stocks in the portfolio, we rate Nomura Holdings as particularly strong in its board structure with more than half of its directors from outside the company, including independent members with accounting qualifications and several from outside Japan.

The TSE now sets guidelines to determine whether outside directors are truly independent. This is an important measure given the recent accounting problems at Toshiba, once held up as an example of good governance. In spite of having had four independent directors since 2006, accounting problems still arose. This failure may have been due to their inability to overrule the internal directors. The Code aims to give outside directors more power and recommends that independent directors make up at least one third of the board.

The Financial Services Authority is putting pressure on financial institutions to unwind cross-shareholdings and raise shareholder returns. Mitsubishi UFJ Group, one of our holdings, has already announced a programme of such unwinding over the next three years, as well as setting higher return targets. This action has also had an effect on some of the non-financial companies in the fund including Sekisui House; we expect Nishimatsu Construction, which has already sold some of its very large equity holdings, to announce further disposals in the coming year.

In addition to the unwinding of cross-shareholdings and non-strategic equity holdings, a recent study for the International Monetary Fund showed that a high corporate savings rate held back growth and that improving corporate governance would help unlock corporate savings. More than half of the non-financial listed companies in Japan have net cash at a time of negative real interest rates: surely not the most efficient use of corporate resources. One significant example of the response to this balance sheet inefficiency has been at Japan’s largest telephone company NTT, which in the year to March 2015 sold shares in its mobile phone subsidiary NTT DoCoMo. The cash freed from this sale was used predominantly for share buy-backs and dividend increases. Over the four years to March 2016 we expect the earnings per share of NTT to have risen by over 60% and through buy-backs they will have reduced the number of outstanding shares by 18%.

Engagement with companies not only addresses governance issues, but also other ESG concerns and those too have an impact on stock price performance. 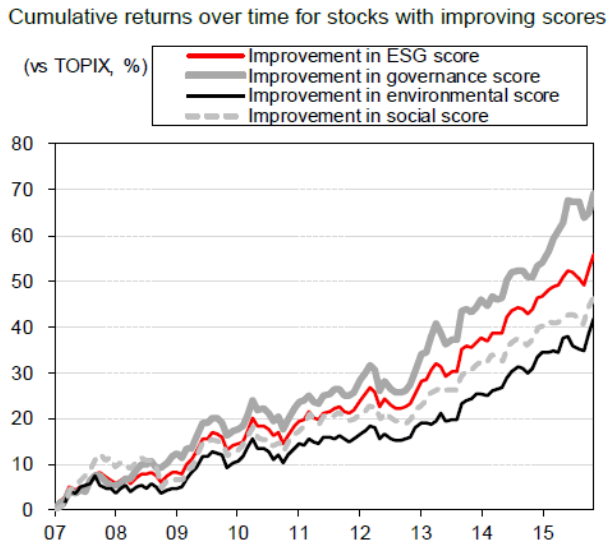 According to data from SMBC Nikko, 300 Japanese stocks have been included in global ESG funds. Japanese investors have been less focused on this area, but this is starting to change. On 29th September, 2015 the Government Pension and Investment Fund (Japan’s largest pension fund manager) signed up to the United Nations Principles for Responsible Investing (PRI) and announced that it would ask entrusted fund institutions if they were signatories to the PRI, require ESG reports from those that had signed and ask non-signatories why they had not signed. It is likely that other pension funds will follow suit, much as they have done with other corporate governance actions that the GPIF instigated. A recent presentation by ROBECO provided evidence that material ESG factors reduce risk and improve the long-term returns of investing in companies. We see strong ESG scores for many of the companies in our fund including Ushio, Secom, Hitachi, Komatsu, Toyota, MUFG and NTT.

Speed and Effectiveness of Change

In his report on UK corporate governance in 1992, Sir Adrian Cadbury stressed that corporate governance must not lapse into tokenism. While the pace of reform in Japan has been slow, change is afoot and active ownership leading to institutional engagement and improved voting patterns is beginning to emerge. Japanese shareholders once ‘hard-wired’ into voting with management may no longer be quite so entrenched and are now prepared to act when they note a distinction between firms that are embracing change and those that are not. No director has yet been voted off a board because of the changes we have discussed, but as a consequence of the introduction of the new regulations it is likely that company managements that do not react with sufficient vigour will be punished by shareholders.

The pressure being applied both directly and indirectly to Japanese corporate managements to improve their balance sheet efficiency, corporate governance and shareholder returns is beginning to have the desired effect. Of course, not all cash will be returned to shareholders; managements have businesses to run and with a falling population in Japan, companies are increasingly looking overseas for growth and much of that will come from acquisitions that have to be funded. Nevertheless, there are ample funds available to many companies which, if freed through the measures highlighted in this note, will provide the necessary resources for both corporate actions and improved shareholder returns.

Our Japanese stocks are well positioned to benefit from the changes in sentiment. Most have strong balance sheets and positive free cash flow. Attitudes towards shareholder returns remain an issue for more traditional managements, but even those types of companies which arguably include Kyocera and Dai Nippon Printing, both of which we hold and which have significant under-utilised assets, may rethink their position.

We remain positive on the outlook for the Japanese equity market in 2016, particularly as the pace of corporate change becomes more evident.