In 1992, Eugene Fama and Kenneth French announced an improvement to the capital asset pricing model (CAPM) - a model that had been used by financial analysts since the 60’s to work out the expected return of an asset. CAPM had assumed only one factor contributed to returns: market risk; however, Fama and French noticed that there were two additional factors: market capitalisation and value (specifically price to book value) that, once added to the model, better explained stock market returns. They noticed that small caps and companies trading on low multiples of book value tended to do better than the market and this came to be known as the Fama-French Three-Factor model.

According to Ibbotson Associates, an investment consulting firm, small caps have increased in value by an average of more than 12% per year between 1927 and 2007 compared to 10% for large caps. There are many potential reasons for the small cap advantage including better alignment through larger insider ownership, greater inefficiencies because of less analyst coverage, a liquidity premium and a greater potential to be acquired.

Value has been an even more consistent factor in outperforming growth, particularly over 10-year periods, where it has been ahead 84% of the time. The psychology of investors has meant that they extrapolate good and poor results out into the future, leading to high growth companies being overpriced compared to low growth ones. 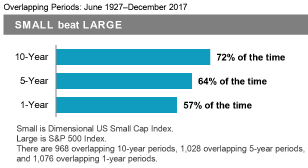 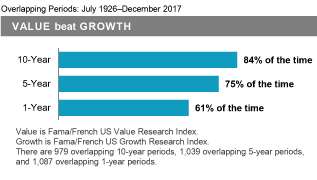 The last ten years have been extremely unusual with both the value factor and the small cap factor producing underperformance. Based on historic data, the odds of this happening would be about 5%.

Many of the largest companies in the world barely existed 20 years ago and have grown without the need for much capital so, despite having capitalisations of over $1tn, they have near zero book value. They have dominant market positions and look set to continue to grow, leading many to argue that the predictive power of low price to book and smaller companies to outperform no longer stands up to scrutiny. We disagree. The ‘robber barons’ in the early 20th century or the ‘media barons’ in the late 20th century provide examples of monopolistic positions that looked unassailable. Eventually competition or government intervention reduced their dominance. We don’t know whether it will be regulation or competition this time, but history suggests profitability and returns will revert to the mean eventually and small-cap value will have its day again.