The year was 1719. Sir Isaac Newton owned shares in the South Sea Company, purchased at around £100 per share. By the spring of 1720, exuberance had taken hold and the shares reached nearly £500. They were the hottest property in England. Newton decided he had made enough money and sold his shares, pocketing a significant profit. However, the share price continued to climb higher, reaching more than £700 by June. Newton could not bear that he may have sold too soon and so jumped back in, swept up in the wild enthusiasm of the market, paying between £700 and £1,000 a share.

Then, in a matter of weeks, investor confidence evaporated. The price fell as quickly as it risen and was back at £200 by early November. Newton’s losses were huge – estimated to be £20,000, or nearly £3m in today’s money.

We all know that Newton was intelligent, achieving great things in the world of physics. But this event shows that he was not necessarily an intelligent investor; he let his emotions get the better of him and was ultimately swayed by the irrationality of the crowd. As he later commented, “I can calculate the motions of heavenly bodies, but not the madness of people.”

Bubbles have occurred for centuries. The South Sea Company is a classic. In just one year, the share price rose almost eight-fold before falling back to its starting point. In the mid-19th century, the share prices of railway stocks in Britain almost tripled before the bubble deflated. Moving to more recent times, the Nikkei rose almost fivefold during the 1980s; it then slowly deflated over the subsequent two decades. And finally, many will remember the Dotcom boom and bust of the last 90s/ early 2000s. 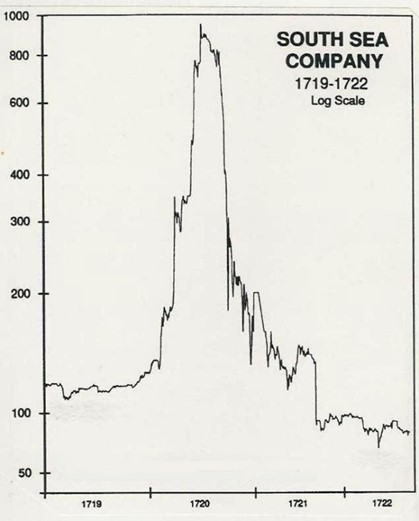 What might we learn from the bubbles of the past? Are there common characteristics or warning signs? We would highlight that:

Do we see any signs of history repeating when we look at current market conditions? Some people have suggested that we are in the “Everything Bubble”. We hesitate at making such a claim. However, we do see several warning signs and believe that certain parts of the market are in bubble territory.

The chart below shows the ratio of the enterprise value (EV) to forecast next twelve-month sales multiples of Software as a Service (SaaS) companies.

Source: Clouded Judgement, April 2021. The median is based on 76 listed SAAS companies.

The valuation peaked in January 2021, with the most expensive five SaaS companies reaching a median EV/Sales multiple of nearly 70x! We think it is worth remembering the quote from Scott McNealy, the CEO of Sun Microsystems, one of the darlings of the dotcom bubble. At its peak Sun reached a price to sales multiple of 10x. A couple of years later, after the share price had fallen from $64 to $5, McNealy questioned “what were you thinking” paying this sort of multiple.

The chart below shows an index of non-profitable technology companies which has sky-rocketed over the last year. 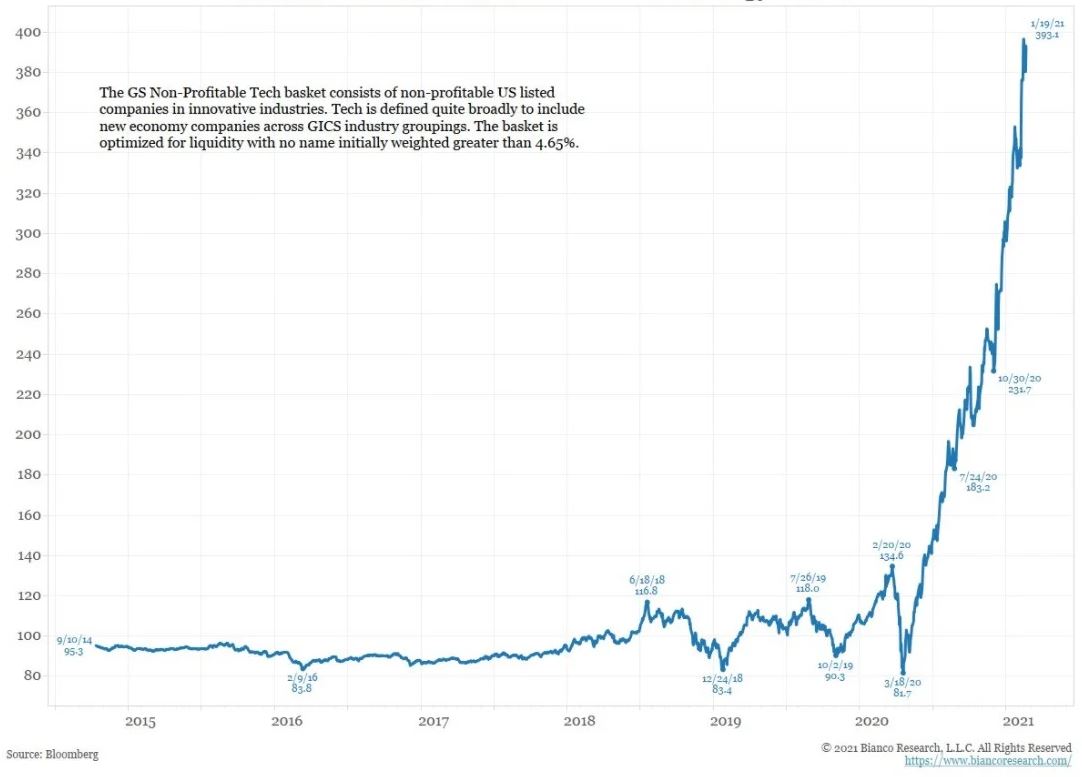 The constituents of this index do matter. It is quite possible that there will be a winner or two in this group and that the price movements are justified. But there will also be losers – and the downside risk is therefore enormous.

The chart below shows the IPO deal count for Special Purpose Acquisition Companies (or SPACs) over the last two decades. SPACs are publicly listed shell companies that are set up with the intention to merge with a private target company, enabling it to trade publicly.

Over the past two years, SPAC formation has accelerated sharply. In 2020, 248 SPACs came to market – already significantly up on prior years. And in just the first 2 months of 2021, we have seen an amazing 175 launches. The pace of issuance has increased dramatically, and we are seeing larger issuances and larger targets. 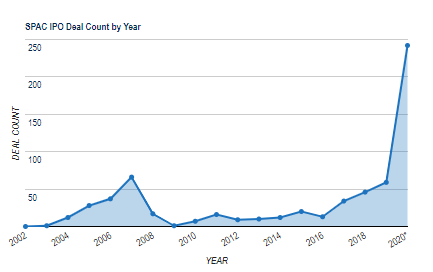 It is also worth highlighting that the terms surrounding these vehicles tend to favour the promoters and earlier movers; those joining at a later stage tend to fare less well. Investors in this area should beware the “bezzle”, the term given by John Kenneth Galbraith to describe the period in which an embezzler has stolen money and the victim does not yet realise it!

GameStop has become a posterchild for this phenomenon: massive price movements in very short periods without much reference to fundamentals.

Parts of the market appear to be exhibiting some of the warning signs associated with bubbles, with common themes emerging. Mark Twain said, “history does not repeat itself, but it does rhyme.” However, in the context of bubbles, one theme does seem to repeat: human emotions.

Such emotions can manifest themselves in different ways. But it ultimately boils down to twin human emotions of Greed and Fear – or, in more modern parlance, the fear of missing out, or FOMO. Greed and Fear are powerful forces that drive markets. Despite more knowledge, humans have not changed when it comes to managing these emotions. Ultimately, the Fear of Missing Out takes over from the Fear of Losing Money.

How can the management of assets using a value mindset help when it comes to bubbles? A value manager, unsurprisingly, has a keen eye on the valuation of an investment – eschewing areas of extreme valuation and focusing on areas where valuations are attractive.

And what do those sorts of areas look like? They are typically parts of the markets that are ignored, unloved and out-of-favour. One might even describe this as looking at anti-bubbles.

Investors tend to focus on the past and extrapolate into the future. However, the future is clearly unknown and should be considered in the context of a range of outcomes. There is no certainty. But it is sometimes more comfortable to be part of the crowd. A value manager often takes a contrarian stance – but that helps avoiding getting caught up in “the madness of people”. 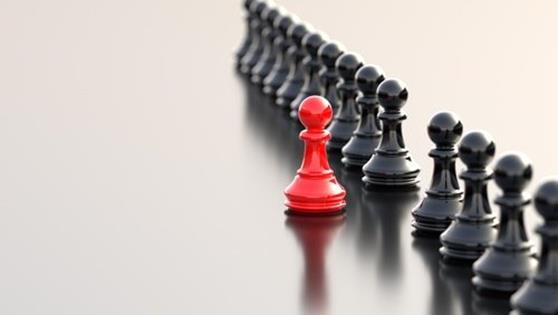 Richard joined OP in November 2006. He was previously employed by Man Securities as a research analyst covering the banking and specialty finance sector. He has also worked as a consultant for Deloitte in London and San Francisco. He graduated from St. Andrews University. He co-manages the global equity income portfolio and contributes to the overall investment selection.